BELGRADE, Serbia -- Novak Djokovic of Serbia and Tomas Berdych of defending champion Czech Republic did what was expected of them Friday, winning their matches and leaving the Davis Cup final at 1-1 after the opening day.

With their 13-1 record in Davis Cup doubles, Berdych and Stepanek have a chance to give the Czechs the lead in the best-of-five series Saturday. It was still unclear whether Djokovic would play doubles or rest for Sunday's reverse singles.

The Czechs are in the final for the third time in five years. Serbia won its only Davis Cup title in Belgrade in 2010, beating France.

Djokovic won for the 23rd straight time since losing to Rafael Nadal in the US Open final in September.

In the first set, he broke Stepanek to go up 4-2. Then he had to save two break points in the next game and failed to serve out the set at 5-3, when he committed a series of errors. He broke again, however, in the 12th game to take the lead.

"I was a bit nervous in the first set," Djokovic said. "It was very important to win that one against high-quality player like Radek."

The second-ranked Serb held serve the rest of the match. He saved seven break points in all, while converting five of six he created.

"Whenever I would face (break points) I would come up with some big serves," Djokovic said. "I think that is what helped me stay confident in those moments."

Stepanek said Djokovic was serving "tremendously consistently," which prevented him from getting another break.

"The first set was really high quality, and so was the third," the Czech veteran said. "His defense is the best in the world -- he proved that with his movement that he showed around the court. He always makes you play an extra shot."

Berdych broke once in each of the first two sets, and twice in the third against Lajovic. The 23-year-old Serb has a 5-12 record on the ATP tour. He replaced Janko Tipsarevic, who missed the final with a heel injury.

"It was a tough one, playing the guy I actually saw for the first time on court," Berdych said. "He had nothing to lose. These situations are not easy. I am glad I was able to make it happen in straight sets."

The Czechs hope for a win in the doubles, as Berdych then faces Djokovic in the reverse singles on Sunday.

"When you look at Novak and how he is playing, it's like Playstation," he said. "So the best way is to unplug electricity." 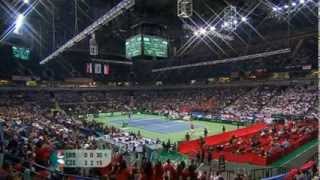 01:40
Tomas Berdych vs Dusan Lajovic Davis cup final-Serbia vs Czech...
Uploaded: over 6 years
over 6 years ago 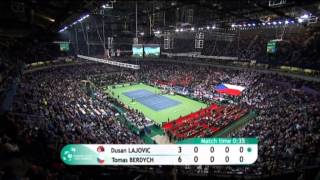