NEW YORK -- Hard to believe this is the same Rafael Nadal who was home during the US Open a year ago, nursing a bad left knee.

Hard to believe this is the guy sent packing in the first round of Wimbledon in June, losing against someone ranked 135th.

"This is probably the most emotional one in my career," Nadal said. "I know I had to be almost perfect to win."

They started in sunlight and finished at night, a 3-hour, 21-minute miniseries of cliffhangers and plot twists and a pair of protagonists who inspired standing ovations in the middle of games.

"Probably nobody brings my game to the limit like Novak," said Nadal, who collected $3.6 million in prize money, including a $1 million bonus for results during the North American hard-court circuit.

There was no quit in either of them, during points that lasted 15, 25, even more than 50 strokes. Those rallies went so long, rarely over when they appeared to be, and spectators often shouted out during the course of play, prompting Nadal to complain to the chair umpire.

This was their 37th match against each other, the most between any two men in the Open era, and Nadal has won 22. It also was their third head-to-head US Open final in the last four years. Nadal beat Djokovic for the 2010 title, and Djokovic won their rematch in 2011.

They know each other's games so well, and play such similar hustle-to-every-ball styles, but in the end, it was Nadal who was superior.

"He was too good. He definitely deserved to win this match today and this trophy," Djokovic said. "Obviously disappointing to lose a match like this."

Nadal improved to 22-0 on hard courts and 60-3 overall in 2013 with 10 titles, including at the French Open, which made him the first man with at least one Grand Slam trophy in nine consecutive seasons. The 27-year-old Spaniard's total of 13 major championships ranks third in the history of men's tennis, behind only Roger Federer's 17 and Pete Sampras' 14.

Nadal has won a record eight titles at the French Open, two each at the US Open and Wimbledon, and one at the Australian Open.

"Thirteen Grand Slams for a guy who is 27 years old is incredible," said Djokovic, who owns six himself. "Whatever he achieved so far in his career, everybody should respect, no question about it."

Nadal no longer wears the strips of white tape he once did to bolster his left knee, and the way he covered the court against Djokovic -- switching from defense to offense in a blink -- proved that while he says he still feels pain in that leg, he definitely does not have problems moving around.

He was off the tour for about seven months, missing the London Olympics and US Open last year, and the Australian Open this year.

"The hardest part is the pain, always," Toni Nadal, Rafael's uncle and coach, told The Associated Press. "You have pain, and you play. But the problem is you never know if you can run so fast, like before, or if you can play against the best players. From one day to (the next), it's difficult, always."

Nadal sure has managed to hide it well. He improved to 8-3 against Djokovic in Grand Slam matches, including a thriller of a semifinal at the French Open, which Nadal won 9-7 in the fifth set after trailing.

These two also played the longest Grand Slam final in history, a nearly six-hour struggle that left both needing to sit in chairs during the ceremony after Djokovic's victory at the 2012 Australian Open.

This time, when it ended with a forehand into the net by Djokovic, Nadal dropped to his back on the court, saluted by an Arthur Ashe Stadium crowd that included the Queen of Spain.

Nadal was relentless from shot to shot, yes, and from point to point, too, but what might have been most impressive was the way he stayed steady when Djokovic recovered from a rough start and began asserting himself.

At the outset, Djokovic was his own worst enemy on many points, a touch or two off the mark. Nadal claimed 12 of the last 14 points in the first set, with Djokovic looking almost bored.

The world saw this sort of listless, lackluster Djokovic two months ago in the final at Wimbledon, where Nadal had exited a Grand Slam tournament in the opening round for the only time in his career. That time, Djokovic went through a difficult semifinal -- at 4:43, the longest in Wimbledon history -- and barely put up much resistance in a straight-set loss to Andy Murray two days later.

In New York, Djokovic was coming off another four-hour semifinal victory, and the key stat in the first set Monday was that he made 14 unforced errors, 10 more than Nadal. 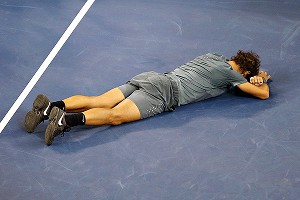 There were no surprising or innovative tactics from Nadal. In the simplest of terms, he reached nearly every ball Djokovic delivered, and Nadal's replies nearly never missed the intended spot, accented by his huge uppercut of a swing and loud grunts of "Aaaah!" By match's end, Djokovic had made 53 unforced errors, Nadal only 20.

"Credit to my opponent. He was making me run," said Djokovic, who won the Australian Open in January and will remain No. 1 in the rankings despite Monday's loss. "I had my ups and downs."

The Serb's biggest ups came in the second set. Nadal was broken a grand total of once through his first six matches in the tournament -- a string that reached 88 games by early in the final's second set. But with Djokovic raising his level, and gaining control of more of the many extended exchanges, he broke Nadal three times in a row.

The first came for a 4-2 lead in the second set, thanks to the crescendo of the longest point of these two weeks, which ended when Nadal's backhand found the net on the 55th stroke. Djokovic used superb defense to elongate the point, tossing his body around to bail himself out repeatedly by blunting Nadal's violent strokes. When the memorable point ended, Djokovic bellowed and raised both arms, and thousands of fans rose to their feet, chanting his nickname, "No-le! No-le!"

Now Djokovic was energized, and Nadal was suddenly in a tad of trouble.

"Djokovic was so good in the second set and the third. But Rafael was always there, there, there. And in the end, he won," Toni Nadal said. "He was so strong in his mind. That was the difference."

The final momentum shift came with Nadal serving at 4-all in the third set. Djokovic earned three break points, thanks in part to a tremendous lob-volley and another point when Nadal slipped and tumbled to his backside.

But a quick forehand winner by Nadal, a forehand into the net by Djokovic on a 22-stroke point, and a 125 mph ace -- Nadal's only one of the evening, it drew shouts of "Vamos!" from Uncle Toni -- helped avoid another break.

"I didn't do anything I felt (was) wrong in these few points," Djokovic said. "He didn't make a mistake."

In the very next game, Nadal broke Djokovic's serve and, apparently, his will. When that set ended with Djokovic pushing a forehand long on a 19-shot point, Nadal screamed as he knelt down at the baseline, his racket on the court and his left fist pumping over and over and over.

"A really important set," Nadal called it later, "and a really special one."

Djokovic made one last serious stand, holding break points in the fourth set's first game, but Nadal saved those, then immediately broke to go ahead 2-0.

Once again, Nadal withstood Djokovic's best and was on his way to another Grand Slam celebration.

"It's what we do when we play against each other, always pushing each other to the limit," Djokovic said. "That's the beauty of our matches and our rivalry, I guess, in the end."