Novak Djokovic will face Rafael Nadal for the right to become this year's ATP World Tour Finals champion after he put an end to Stanislas Wawrinka's debut run in the semi-finals.


The defending champion is looking to win the season-finale for the third time in his career, and will face Nadal after defeating tournament-debutant Wawrinka 6-3 6-3. In claiming the victory, Djokovic heads into the final on the back of a 21-match win streak, and will face off against the last man to beat him, which was Nadal back at the US Open.


From 0-30, Djokovic won four straight points to avoid dropping serve in the opening game of the match. However, Wawrinka broke the Serb to move 2-1 in front with some fine all-round play.


As the saying goes, a break is not a break unless you hold, and Wawrinka was guilty of handing the advantage he worked hard for back to his opponent. The Swiss hit a couple of wayward forehands, and Djokovic was quickly back on level terms.


After going 4-3 in front, Djokovic demonstrated why he is the best defensive player on tour with some unbelievable scrambling in the eighth game. It was a point he should never have won, as Wawrinka was in control of the rally, but he failed to finish Djokovic off, and a crucial break was secured for the Serb - with Wawrinka smashing the ball high into the giant screen above the court in the arena in frustration for slipping up.


Wawrinka had one break-back point to stay alive in the first set, but Djokovic with a superb kick-serve out wide fended it off en route to taking the set.


Yet again the defensive qualities of Djokovic were conveyed as he broke Wawrinka in the first game of the second set to race into a 2-0 lead.


Wawrinka began to struggle, but managed to stay with Djokovic in his following two service games by saving break points to trail 3-2. Djokovic though was not to be denied as he maintained the break throughout the set to seal his place in Monday night's final. 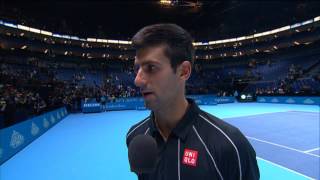 00:50
Novak Djokovic Returns To The Final Of The 2013 Barclays ATP World...
Uploaded: about 6 years
about 6 years ago 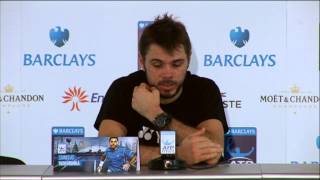