Sign in to rate
Share
Novak Djokovic talks to Craig Gabriel after winning the first rubber of the 2013 Davis Cup by BNP Paribas Final in Belgrade. Click here to subscribe - http://goo.gl/Kk1Ft Davis Cup by BNP Paribas is the largest annual international team competition in world sport. This prestigious event, which is one of the cornerstones of the tennis calendar, gives players the chance to represent their country in an otherwise individual sport. Founded by Dwight Davis in 1900, Davis Cup began as a challenge match between USA and British Isles, which was held at the Longwood Cricket Club in Boston. Davis himself played in the inaugural Davis Cup tie, steering his country to the first of many title victories. USA has won the Davis Cup 32 times - more than any other nation. Visit the official website: http://www.daviscup.com/ Follow us on Twitter: http://twitter.com/daviscup Like us on Facebook: http://www.facebook.com/DavisCupTennis
Related Topics
Video Center
Video Details 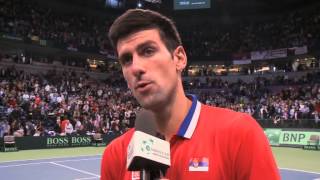 02:13
Novak Djokovic after defeating Radek Stepanek
Uploaded: over 6 years
over 6 years ago