Yet another unyielding performance from Novak Djokovic has consigned Roger Federer and Juan Martin Del Potro to a shootout on Saturday that will determine whose season ends first.

As in the Wimbledon semi-final the world No 2 went the distance with Del Potro, this time across at London's O2 Arena, and not even the watching Sergio Aguero could will his compatriot to victory, with Djokovic running out a 6-3 3-6 6-3 winner.

The result means Djokovic is the first player through from Group B to the last four of the Barclays ATP World Tour Finals, while Switzerland's finest will battle the Argentinian to see who joins him there - and who sails away into the off season. Battling through: Novak Djokovic outfought Juan Martin Del Potro to book his place in the semi-finals Federer had earlier beaten Richard Gasquet 6-4 6-3 to keep his chances alive, but the imperious way in which the Serb ran Del Potro all over the court indicated that he remains firm favourite to win the event. It could hardly be otherwise when he has won 19 consecutive matches, and there is still no sign of him buckling under his heavy schedule.

Djokovic and Federer are in the same group but remain on opposite sides in the ongoing debate about anti-doping measures in tennis, with the debate continuing to be an off court distraction.

Federer clearly has little time for Djokovic's furious denouncement of testing procedures that followed his fellow Serb Viktor Troicki being banned for a year after declining to do a blood test in Monte Carlo this year. Mixed emotions: Del Potro fought back to win the second set but couldn't carry his form into the final session Mixed emotions: Del Potro fought back to win the second set but couldn't carry his form into the final session

In a far more measured assessment he actually argued that testing needs to be more vigorous and widespread to maintain levels of probity at a time when suspicion and innuendo abounds.

He is not convinced by Troicki's assertion that he thought it would be okay to come back the next day and do the test, nor by Djokovic's reaction earlier this week when he asserted that he no longer trusts the system to catch potential cheats.

'I just feel like we're not getting tested maybe enough,' said Federer. 'Overall I trust the system, I think they're all very professional. I do believe that when you are requested for a sample you have to give it. It doesn't matter how bad you feel, I'm sorry. Only one can stay: Del Potro now faces Roger Federer (above) for a place in the semi-finals at the O2

'The test the next day for me is not a test anymore because of what could happen overnight. That's where we need to be extremely firm.'

He and Andy Murray have consistently spoken with one voice on this issue, and the 26 year-old Scot had earlier tweeted along similar lines, saying: 'Read and respect the rules and everything is very simple.' 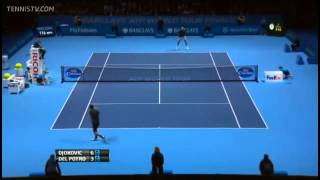 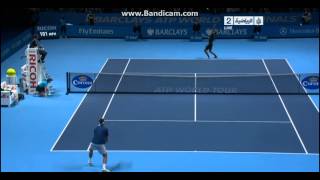